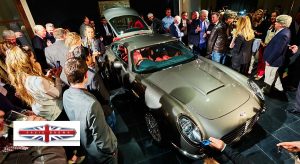 It was a real pleasure being asked and invited to photograph the official press release of the David Brown Speedback launch in Chelsea, London recently.

David Brown CEO said: “The launch of Speedback is the realisation of a dream for me, and is the result of skilful and dedicated work by a team of highly talented designers, engineers and craftsmen. I am delighted at the reaction of the media, our suppliers, potential customers and friends, and I look forward to presenting the car to the public in Monaco. The Speedback name perfectly reflects the classic sports car tradition of the past, whilst also doing justice to the sophisticated silhouette of the car’s hand-built body and unique styling which features amongst much other detail, a fold-down picnic seat.”

The car revealed today is the result of 18 months of hard work by the David Brown Automotive team, including highly-experienced Chief Designer, Alan Mobberley. The car, which has been engineered and handcrafted in Coventry, proudly uses traditional British materials and craftsmanship. Speedback promises exceptional performance and handling from the latest Jaguar 5 litre supercharged engine.

“This car will appeal to anybody who desires a truly individual sports car, which can boast a fine British pedigree and which will only be produced in limited numbers, thus ensuring the kind of exclusivity associated with Britain’s once proud heritage of traditional, high-quality, automotive coach-building”, said David.